Dating back to the first half of the 18th century, Palazzo Costanza, along with other elegant buildings, is one of the oldest, owned by powerful families in terms of wealth and culture and who left their mark in the history of this small town. Currently occupied and with renovated interiors, the inner courtyard is the only element of the building that can be visited, with its monumental portal and the small chapel dedicated to St Dominic. 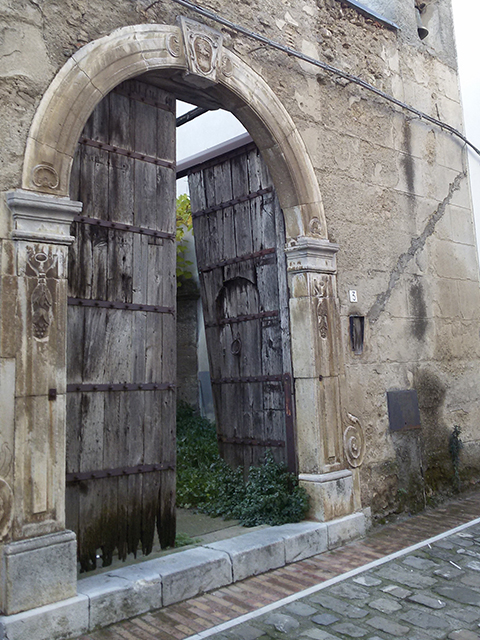 Aligned with the window, on the inside, there is an altar made with local coloured stone, on which there is a small niche. Here was a painting with Our Lady of the Rosary, among St Catherine, St Dominic and St Thomas Aquinas attributed to Sellitto.

The building, around the three sides of the courtyard, consists of a ground floor that was used as a storeroom or to shelter animals, and a first floor where daily life took place and which had a large official room, a so-called ‘gallery’, as it was customary in the other buildings.

Also featuring a very modest facade, its distinctive architectural element is an 18th-century entrance portal made with local stone, it consists of a pillar and a capital, holding the arch and whose keystone bears the family coat of arms with an animal. In the lower part, a series of spiral-like motifs; the top of the facade features a small bell, still rung by hand today with a ladder whenever the procession passes, marking the presence of the small place of worship.

The portal leads to the central courtyard with a large staircase, starting with a single flight of stairs and then dividing to the right and left. The courtyard has two pillars, which were perhaps meant to support canopies for seasonal use.

CULTURAL HISTORICAL GOODS IN THE CENTER

We use cookies on this website to enable us to offer you the best browsing experience possible. The cookie information is stored in your browser and performs functions such as recognizing you when you return to the website and helping us to understand which sections of the website you find most interesting and useful.

You can change the cookie settings by browsing the tabs on the left side of this screen. Please note that some technical cookies cannot be disabled as they are essential for the correct display of the website.

These cookies must necessarily be enabled because they are part of the cookie selection system and allow you to save your cookie preferences at any time.

If you disable this cookie, we will not be able to save your preferences. This means that every time you visit this website you will need to enable or disable cookies again.

This website uses Google Analytics to collect anonymous information such as the number of visitors to the site, and the most popular pages.

Activate strictly necessary cookies so you can save your preferences!

Activate strictly necessary cookies so you can save your preferences!